After a week of soldering, programming and teamwork, a cheer went up when 21 sensors, brought in from all corners of Africa, came online and started submitting their measurements to the internet. The sensors were designed by the winners of the TAHMO Sensor Design Competition. Their price: to join researchers from Delft University of Technology (the Netherlands) for a week in Nairobi, Kenya and work together on integrating all winning sensors into one big weather station. From Monday 29 July to Friday 2 August 2013 this Final Challenge was held in buzzing iHub. Twelve selected participants from Nigeria, Kenya, Uganda, Zimbabwe and Spain worked together with water management professor Nick van de Giesen and MacGyver scientist Rolf Hut from Delft University of Technology, and Adam Gleave from the Raspberry Pi Foundation to create a “for Africa, from Africa” weather station.

During the five day workshop, the 21 sensors brought by the participants, measuring variables such as rainfall, temperature, humidity and wind were integrated into an experimental weather station. All sensor were connected to one Raspberry Pi, a low-cost microcomputer, that functioned as the heart of the integrated weather station. The Raspberry Pi sent all data obtained by the sensors to the internet through MQTT, a messaging transport that is ideal for connecting small devices connected on networks with minimal bandwidth. IBM’s system Intelligent Operations for Water (IOW) stored the data from the 21 sensors in the cloud and nicely visualised measurement values on a map.

From 20 initial entries, 13 design teams received a Maker’s Package in Round II, and 8 teams were then selected to join the TAHMO Final Challenge in Nairobi.

Learn about the 20 Round I entries in the 2013 Design Competition [view pdf].

Meet the participants of the TAHMO Final Challenge below, and watch the videos they submitted for Round II.

Abdullah Akolade and Niyi Funsko OkeAbdullah (left) is presently a BSc student in Electrical Engineering at Obafemi Awolowo University in Ile-Ife. He has a special interest in power engineering. After obtaining his BSc degree, Abdullah hopes to continue for his MSc and eventually PhD.

Niyi (right) is a student at Obafemi Awolow University, Ile-Ife, studying in the Department of Electrical Engineering to a obtain a BSc (Hons). Looking to the future, Niyi plans to pursue his MSc degree to increase his knowledge in ICT and electronic engineering. 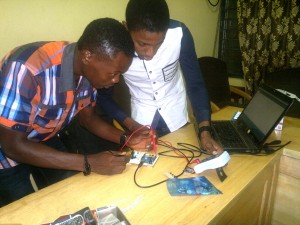 Ademola (right) is a BSc student in the Department of Electronic and Electrical Engineering at the Obafemi Awolowo University (OAU) in Ile-Ife. Ademola is the technical director of the Power Club at OAU, a club that teaches students how to design and build electrical and electronic devices. Also, he is member of the Entrepreneur Club at OAU.

Olaolu (left) is a BSc student in the Department of Computer Science and Engineering at the Obafemi Awolowo University in Ile-Ife. He is planning to travel abroad after graduation to pursue his MSc in either Ethical Hacking or Database Administration. In the future, Olaolu would like to start his own company.

Watch below the final video of Ademola and Olaolu.

Ahmed Balogun (left) is a Reader in the Department of Meteorology at the Federal University of Technology, Akure (FUTA). He received his BSc and MSc degrees of Technology and PhD degree from FUTA. Ahmed is currently supervising MSc and PhD candidates in urban climatology.

Ladipo (right) is an Assistant Chief Technologist in the Department of Meteorology at FUTA. He holds a BSc degree of Technology and a post-graduate diploma and is currently studying for his MSc degree. Ladipo facilitates teaching and research regarding Meteorology. His areas of specialization are instrumentation and measurements.

Other members of the team represented by Ahmed and Kehinde include Mr. A. Okunlola, Prof. Z.D. Andeyewa, and Dr. Philip.

Watch the final videos of this team: 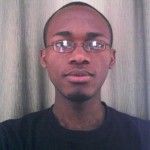 George is a BSc student in the Department of Computer Engineering at Makerere University in Kampala. He is also a software and embedded systems developer.

In the initial design, the ADC’s are connected to a microcontroller (Arduino) that processes, analyzes and stores the data. However, as he went along with his design, George made some adjustments to reduce the size of the system: “I realized that most of the work could be accomplished through code in the microcontroller. Hence I decided to use the ADC on the microcontroller instead of using external ADC’s.”

Gilbert is a graduate holding a BSc degree in Instrumentation and Control Engineering from Egerton University. He is currently pursuing a MSc degree at Jomo Kenyatta University of Science and Technology (JKUAT) in Nairobi.

Kenneth is a graduate holding a BSc degree in Instrumentation and Control Engineering from Egerton University. He is currently working in a water bottling plant as an Electrical and Instrumentation engineer. Kenneth hopes one day to go back to school for a MSc degree and hopefully a PhD.

Gilbert explains a problem that arose along this decision: “Initially we intended to use the gyroscope, which had inherent capability to measure ambient temperature. The compass does not have that ability. To cater for the temperature measurement as per our initial design we have decided to use a temperature sensor in our circuit together with the compass.”

After some struggling, Gilbert and Kenneth managed to have their readings displayed on an interface (see below). With this output, wind speed and wind direction can be calculated, while temperature can be read directly. 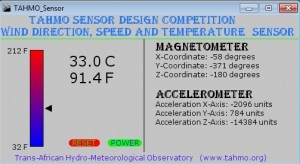 Watch the final videos by Gilbert and Kenneth:

Hope is connected to the Department of Electrical and Information Engineering at Covenant University in Ota. He works as a lecturer, research assistant and is a PhD student. Hope represents a team designing and building a wind sensor using a capacitive diaphragm that further consists of Samuel N. John, Efe-Imafidion Simeon and Obebeduo Efeoghene.

Irene is pursuing her MSc degree in Agro-Engineering in the ‘Ingeniería Rural’ Department of the Universidad Politécnica in Madrid, taking courses like Hydraulics, Thermodynamics and Modelling. She also works for an NGO.

The objective of this team was to build inexpensive sensors oriented to estimate evapotranspiration. Evapotranspiration is the sum of evaporation and plant transpiration from the Earth’s land surface to the atmosphere. The team focuses on three variables: wind velocity, solar radiation and soil moisture.

James is an MSc student in the Department of Applied Physics at the University of Zimbabwe, specializing in Electronics. He also works as a teaching assistant at his university. James represents the team that further consists of Dr. Xavier Carelse and Dr. Mashonjowa.