The ISMN is a sort of network-of-networks that collects data from many different soil moisture networks around the world and makes them available through a portal (https://ismn.earth). It does not come as a surprise that, also when it comes to soil moisture data, the African continent is underserved. Of the 2783 stations in the ISMN database, only 89 (3.3%) are in Africa, of which by far the most (70) are TAHMO stations. Africa covers just over 20% of the Earth’s land surface. If we would be able to provide each of the 600 TAHMO stations with soil moisture sensors, 21% of the ISMN sensors would be in Africa, a nice goal to strive towards.

The majority (53%) of ISMN users state that they use the data for validation of satellite soil moisture products. This implies that most of these products are not really validated for Africa and have a large bias towards circumstances that can be found in latitudes above 30 degrees North (Latin America and most of tropical Asia are doing worse than Africa). In turn, this makes these satellite products less reliable where they are needed most. 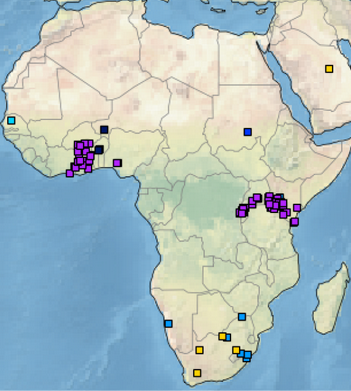 COSMOS is a global network of soil moisture sensors that use the relative abundance of slow (thermal) neutrons with respect to fast neutrons to determine how much moisture is present in an area of about 30 hectares around the sensor. Because they cover a much larger area than a typical soil moisture sensor, they are especially valuable for satellite and model validation. Of the 108 COSMOS stations, six can be found in Africa, of which five in South Africa. COSMOS sensors are relatively expensive. Within the EU-funded TWIGA project, in which TAHMO is a partner, an alternative neutron sensor is being developed that costs about 2% of a COSMOS sensor. For a description of the underlying principles and first results, see this item in the TWIGA newsletter: here. Would it not be great if, say, 100 TAHMO stations would have such soil moisture sensors? It can be done!

A preprint of the article describing the impressive ISNM can be found here  (the final article will become available soon).