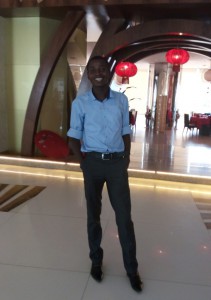 Oluwatobi Oyinlola at the Hackaday finals

The past Summer, TAHMO ran a project under the umbrella of Hackaday. The project helped us to move forward on the lightning sensors and the more advanced usage of GPS signals. We made it to the semi-finals but unfortunately we did not make it to the finals. However, team-member Oluwatobi Oyinlola was able to travel to San Francisco to attend the finals. He writes: “It was a great privilege to represent TAHMO at the Hackaday Conference in San Francisco in November 2015. I met many like-minded people in the field of embedded systems, such as Chris Low, David Pruth and some other electronics hobbyists. I really appreciate the support of TAHMO for my participation. Unfortunately, we did not make it to the finals but is was a very worthwhile experience.”

Hacking is still very much at the heart of TAHMO and we hope we will be able to run another competition on the African continent the coming year.