School in the Hague, the Netherlands, wins TAHMO competition 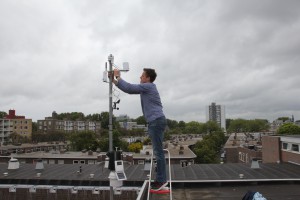 Installation at the Populier, the Hague

At the beginning of this year we started a competition for teachers, in which we asked teachers to share their favorite lesson plans related to weather and climate. The most creative, useful and innovative lesson plan was created by Eric Schippers from the Populier, a secondary school in the Hague, the Netherlands. His lesson plan was about solar cookers, which students have to design, make, test and evaluate. The TAHMO-members thought this lesson plan fits TAHMO’s vision, is very innovative and contributes to the 21st century skills. 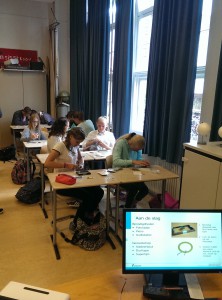 With winning this competition, the Populier got a TAHMO weather station installed on top of the school building. Additionally, the school is now part of the School2School pilot in the Netherlands. Together with another Dutch school, named Haagsche Schoolvereeniging, the school will test several lesson plans and provide feedback for optimization. Furthermore, these two pilot schools are closely involved in the creation of the entire School2School program and its activities.

The Populier is known of its very creative and active science department, in which maker education plays a major role. It is also noticeable that the students are very engaged and motivated. In June, for example, they organised a 24-hours marathon to raise money for better education in Ethiopia, in which students got 24 hours non stop lessons. During day and night students did several workshops, games and a walking tour to the beach. One of the lessons was about TAHMO and students could make an acoustic rain gauge, which was conducted by Nadine Rodewijk. A total amount of €5000,- has been raised during this intensive event.