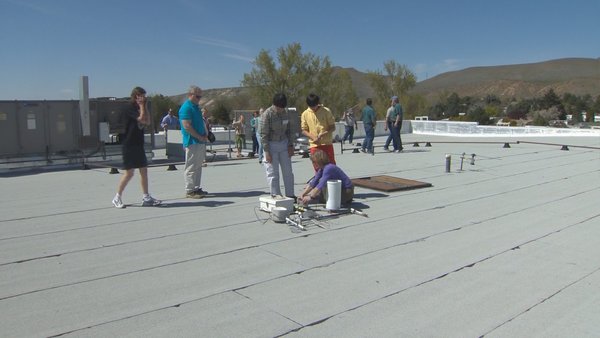 TAHMO’s new sister schools program helps connect African schools with North American/European schools, and will allow students and teachers to monitor and compare their local weather and climates. The first American sister schools station was recently installed in Boise, Idaho, and will be paired with its sister school station in Koyoo, Kenya.

The published story is available here:

BOISE — We often have students visit the KTVB studio and ask our meteorologists how they track the weather. It is one of the most fun and interesting parts of the job. We understand that students at East Junior High School in Boise are taking learning about weather to another level.
Not only are the students actively participating by building their own weather station, but this program will also help hunger.
It is part of a dream that was envisioned at the beginning of the school year and is finally coming true.
“I am pretty excited,” said student Bing Ho.
“I like math and science so this is very interesting to me,” said student Danielle Moro.
“Actually seeing how the weather was at different times, that’s pretty cool,” said student Megan Byres.
We are talking about a professional weather station capable of recording real time weather. The students are putting the station together on the school’s roof and connecting this station to a computer to record all of the information.
Pam Aishlin is a geologist volunteering on the project, with help from the Geoscience program at Boise State University. She’s teaming up on the international project with a group called TAHMO, a non-profit organization that is putting in weather stations across Africa.
“To help with climate modeling for the region, as well as to help local farmers. The area very much needs more weather data,” said Aishlin.
Better weather observations for areas of Africa means better farming to feed the African people. She chose East Junior High and is teaming the school up with a sister school in Africa known as Coyu.
“The sister schools, going forward, will do fundraising to support,” said Aishlin. “For example, East will do fundraising to support Coyu. Right now Coyu has its weather station, but they need a fence around the weather station, so East will fundraise to get that provided for their sister school.”
This is only the beginning.
“East Junior High is the first experimental school in the U.S./European side of the equation,” said Aishlin. “They aim to put in thousands of weather stations across Africa, many of them being at schools because it also provides the educational component for the children.”
Boise’s River Glen Junior High School will be the next school. They’ll set up a weather station and also be a sister school to Africa. So far, how are the children doing in this volunteer effort?
“They are excited. For students to show up two days a week after school, on their own time, volunteering their time, to learn how to build a station, how to program it, they’re very excited,” said Aishlin. “They’re even more excited about the African sister-school component. They’re excited about having connections globally.”
School Principal David Geene agrees.
“I think the key component is it brings East Junior High and this local community on the weather track to the rest of the world and it connects them to that weather pattern worldwide,” said Greene.
East Junior High deserves a big pat on the back for being the first to build an educational weather station to provide local weather and to team up with a school in Africa in such a worthy cause. It is a very good dream.

Currently we have almost 1000 stations set up. Sti

Wishing you a wonderful year ahead. from everyone

WOMEN ARE INCLUDED! Managing and maintaining any

The TAHMO project is committed to serving the publ