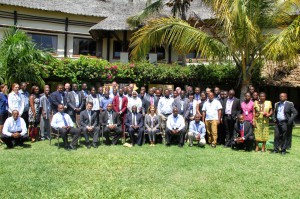 The UNDP, under funding from the Global Environmental Facility (GEF) has launched a project entitled “Climate Information for Resilient Development and Adaptation to Climate Change in Africa” (CIRDA).  TAHMO has been invited to both of the kick-off workshops of CIRDA (Ethiopia in April, and Tanzania in October), and now has been invited to put pilot stations in each of the 11 CIRDA countries ( Benin, Burkina Faso, Ethiopia, the Gambia, Liberia, Malawi,Sao Tome and Principe, Sierra Leone, Tanzania, Uganda, and Zambia).  TAHMO will place up to 5 stations per country in schools as part of the School-2-School program.

Over the coming three years CIRDA will provide each country with funds sufficient to install hundreds of stations.  At this point the countries are evaluating a wide range of technological options, with TAHMO stations in the mix.  With the expected roll-out of the second generation of TAHMO stations in January, and the introduction of the final one-piece stations in June, we hope to be selected in at least some of these countries.  TAHMO has been invited to carry out a half-day training on installation, maintenance, and use of TAHMO stations and data systems in Uganda in March, 2015.  This will be especially important for the installations to take place in Sierra Leone and Benin, where travel is currently complicated due to ebola.